A Scenic Stroll at Summter See in Brandenburg

Summter See is a charming destination for a day trip in Brandenburg’s Oberhavel district – this pristine lake is just a stone’s throw away from Berlin, and it only takes about an hour to walk the circular tour around its shoreline.

We’re certainly not the type to dwindling daylight deter us from leaving the city. Our only criteria at this time of year? Short strolls and manageable travel times; we like being back in the comfort of our homes before nightfall sets in.

Summter See certainly has a special place in our nature-loving hearts. Idyllically located in Mühlenbecker Land, you can drive up here from Mitte, Berlin in just 30-minutes.

The Silence of Summter See

As you approach the clearing in the forest on the lake’s northern shore, you’ll already be able to glimpse the glistening waters from afar. Clusters of towering trees complete the picture of a peaceful, little oasis. In summer, the further you swim out into the lake, the quieter it gets.

In autumn and winter, you can experience this same sense of silence on an hour-long stroll around the lake. The path leading along its shoreline will take you through a mixed forest and a pine forest. This is also a fantastic place to bring your four-legged friends—dogs that aren’t afraid of water will have heaps of fun exploring the many sandy access points that lead into the lake.

As you pass through the tiny village of Summt, be sure to take note of the old houses along the way. Aren’t we all secretly dreaming of life in a little dwelling somewhere in Brandenburg…

You can easily extend your autumnal stroll and take a slightly longer tour of the area. Starting out from the parking lot on Summter See’s eastern shore, head towards Mühlenbecker See and continue walking until you reach Damm’s Mill Castle (Schloss Dammsmühle). Erected in 1768, this abandoned site looks like it sprung from a fairy tale. Incidentally, its story is slightly unconventional. The castle was built by a leather manufacturer called Damm. Since then, it has passed through the hands of numerous other people, including a British entrepreneur who went by the name Hart. He was later forced to flee Germany, together with his Jewish wife. In Soviet times, the Stasi used the castle as a hunting lodge. Most recently, it was transformed into a film set for the German drama series Babylon Berlin.

Sitting on the northeastern side of the pond, we admire the architecture and can’t help but wonder what purpose it is destined for next. A hotel, perhaps? That was what it served as after German reunification. Or a temporary site for a festival, like in the early 2000s? The backdrop for our next favourite TV series, maybe?

Only time will tell. Until that day comes, we will continue to enjoy Mühlenbecker Land’s enchanting scenery and appreciate the sound of silence. 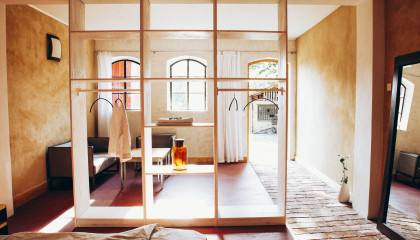 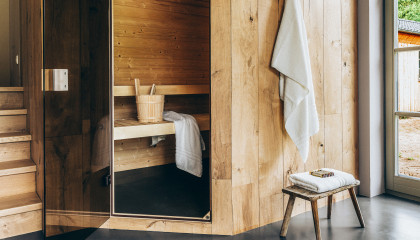 Indulge in a Relaxing Sauna Vacation