The perfect destination for nature lovers with a penchant for fine dining and design—New Wave Hotel on Norderney Island. 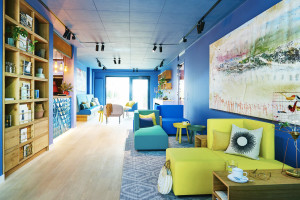 This summer, we set out towards the North Sea to explore the East Frisian Islands. Our trip evoked fond memories from our childhoods; countless holidays spent at the seaside with our parents and grandparents; innumerable sunny days traversing the coastline; endless hours relaxing in holiday homes on one of the many isles… As young adults, our curiosity drove us to explore more far-off destinations; the familiar East Frisian landscapes felt somewhat old-fashioned compared to the exotic beaches around the world. Little did we know, a decade later, our research for our Hamburg Edition and Weekender Edition Hamburg would bring us full circle. We returned to the North Sea’s shorelines only to be greeted by an abundance of beauty—cosy holiday homes, stunning apartments and impressive hotels. We knew then and there that we’d return to the islands to rediscover their shorelines. 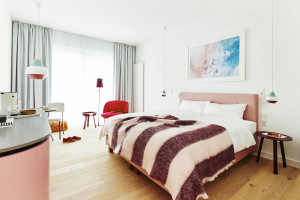 Our first trip brought us to Norderney, an island nestled between Juist and Baltrum. Only out-sized by Borkum, this 26.3 square-kilometre island prides itself in being the second-largest of the twelve East Frisian Islands. Norderney is conveniently located for holiday goers looking to escape Hamburg, Bremen, Lower Saxony and North Rhine-Westphalia for long weekends in nature. It’s only a few hours’ drive or train ride from these destinations to Norddeich. From here, a 50-minute ferry ride later drops vacationers on Norderney’s shorelines. The centre of town is only a few minutes from the ferry terminal. While many of the older hotels and holiday homes in the area give off a somewhat shabby feel, newly-erected establishments are attracting an increasing number of guests who value high-end design and tasteful décor. 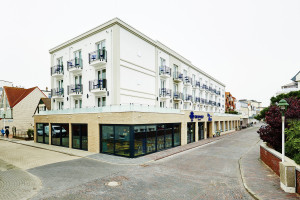 We booked a room in Norderney’s New Wave Hotel, and from the minute we set foot on the premises, it felt like we were coming home. New Wave Hotel opened its doors in 2019, an event which had a significant impact on the shift towards increased modernisation efforts of the local hotel landscape. Relaxing music and young, friendly staff greet us in the boutique design hotel’s lobby. The sense of style emanating from the hotel’s interior mirrors design concepts that have established themselves in Berlin, Hamburg and Munich’s trendiest establishments. We’d certainly never experienced this tasteful aesthetic on Norderney Island before. Michael, the manager, revealed that the hotel is owned by the Möller family who fondly filled their establishment with James Bond memorabilia, Pop Art, 60s furniture, and Scandinavian design elements. New Wave Hotel is sure to warm every design lover’s heart. Finnish box-spring beds are surrounded by the likes of Vitra, Knoll International, Hay, Stelton, Muuto and other timeless design classics. The motto “Pop Art meets laid-back Scandi décor” weaves through the hotel’s interior, and a different colour scheme reveals itself on each floor. While the soft pink rooms on the ground floor (“SEESTERN”) represent seashells’ multitude of shades, the blue hues in the rooms on the first floor (“NEY”) evoke a cool ocean breeze. Further up, the second floor’s (“SÂN”) yellow palette breathes elements of sunshine and sand, and the third floor’s (“DÚN”) green tints draw from the grasses that thrive in the dunes. Families, couples and single travellers all feel at home in the hotel’s 73 rooms. 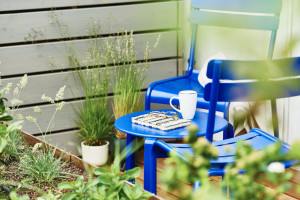 We opted for one of the Seestern (“starfish”) rooms because it came with a little terrace. Every morning, we started our day with a sumptuous breakfast at Oktopussy, the hotel’s in-house restaurant. Oktopussy’s à la carte menu features a delectable selection of breakfast platters as well as a series of specials, such as the “Morning Glory” power-bowl, the “Sweet & Salty Pancake Morning” and the “Surf & Turf” roast beef bagel. 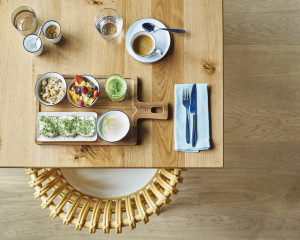 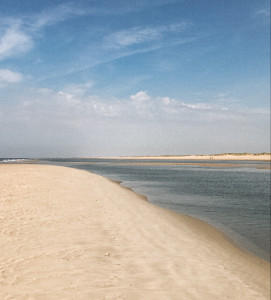 Cycling is by far the best mode of transport for exploring the island. You can rent bikes at the hotel and set out on one of the many adventures Norderney has to offer. A good rule of thumb: the further east you go, the quieter it gets. If you prefer walking, we recommend the trail that starts on the island’s eastern-most parking lot (53.713205, 7.257758) and passes through the nature reserve. It will lead you to a shipwreck on the other side of the island. 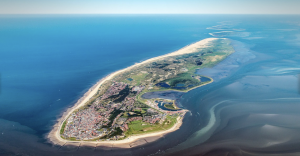 The rolling sight of dunes and pristine landscapes await you en-route. If you circle back via the beach on the island’s northern shore, it should take about 3 – 4 hours to complete the entire hike. And for those lazy days at the seaside, wicker beach chairs are lined up on the island’s the western and northern beaches. Norderney Island is delightful all-year-round, and we’d especially recommend coming during the low season. It’s much quieter here in autumn and winter, and you’ll have the beaches almost entirely to yourselves. New Wave Hotel serves as the perfect starting point for bicycle tours through the dunes and long walks on the beach rounded off by the best breakfasts on the island and delectable dinners at Oktopussy. 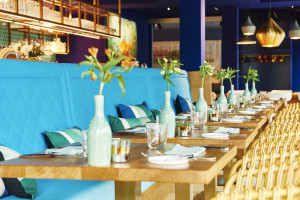 Make your way up to the Skyfall Bar before nightfall. The bar is located on the hotel’s rooftop, making it the perfect place for an aperitif while watching the sunset. You don’t have a direct view of the sea from every table, but the atmosphere is very cosy, and the drinks are delicious. Oktopussy’s dinner menu is also a huge highlight. The kitchen is currently run by Sascha Lissowsky, a top chef who made a name for himself in the award-winning restaurant “La Vie” in Osnabrück.

Nothing rounds off a long day of salt-kissed air like his nourishing menu which features down-to-earth international dishes made from regional ingredients. The menu changes monthly leaving little to be desired. The chef’s young team is attentive and dedicated to ensuring the well-being of every guest. With your heart full and your belly bursting, it’s relieving to find yourself just a few footsteps away from your soft pillowcase. If you want to dine at Oktopussy during peak season, we’d recommend reserving a table—the restaurant’s 80 seats are certainly sought-after.

P.S.: If you’re in Berlin and eager to experience Sascha Lissowsky’s kitchen and the Möller family’s restaurant philosophy, treat yourself to a meal at Anouki Brasserie in Charlottenburg. 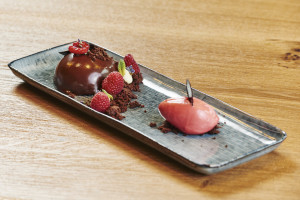 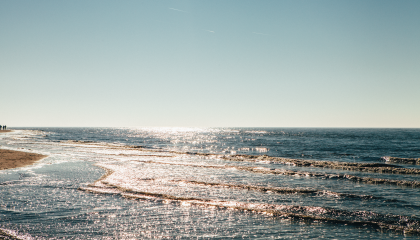 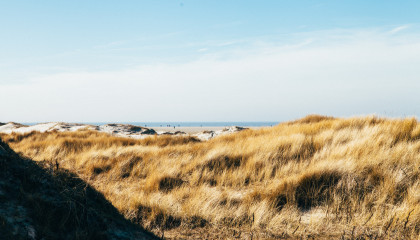 Wild Beaches for a Wintry Walk up North